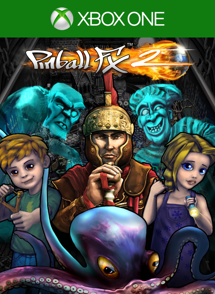 Game Description: All of your favorite pinball tables are now available on Xbox One! Download the free Pinball FX2 platform and access to the best pinball library available, featuring tables based on the biggest names in pop-culture. The fantasy themed Sorcerer’s Lair table is available for free play for all players! Table library includes Star Wars Pinball, Marvel Pinball, Plants vs. Zombies Pinball and a great collection of original designs from the pinball wizards at Zen Studios. New tables are added all the time!

Purchase Pinball FX2 from the Xbox Game Store
Here’s a bit more info on Pinball FX2, direct from our friends at Zen Studios:

Zen Studios is pleased to announce that the anticipated Pinball FX2 pinball platform which allows players to import their tables from Xbox 360 to Xbox One at no charge is now available on Xbox One, the all-in-one games and entertainment system from Microsoft, via the [email protected] self-publishing program.

Pinball FX2 is a free to play pinball platform download on Xbox One, offering most of the Pinball FX2 library on day one, including the Star Wars Pinball table packs, a great selection of Marvel Pinball tables including the recently released Guardians of the Galaxy and Deadpool tables, and Zen’s original roster of tables available for purchase, with future tables, including The Walking Dead Pinball, coming to Xbox One on August 28, 2014. Any available tables originally purchased on the Xbox 360 games and entertainment system from Microsoft will transfer over to the Xbox One version of the game at no additional cost.

For detailed information on the import process, please visit the Pinball FX2 Xbox One FAQ on the Zen Studios forums.

Pinball FX2 brings all the pinball action for which the franchise is known into the next-generation with 1080p graphics at 60 frames per second, worldwide tournaments, new achievements, and a slick new menu interface.

Zen Studios would like to sincerely thank [email protected] and a whole bunch of great people at Microsoft for working with us to make the table import feature work.