The world’s largest videogames event, gamescom, is just days away. Xbox is going big in Cologne, Germany next week, and for the first time, you’ll be able to follow along at home – LIVE. 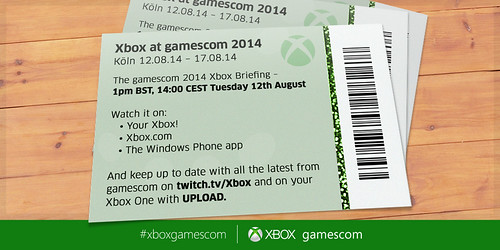 Tune in on Monday, August 11th at 19:00 CET (1pm Eastern, 10am Pacific) to see Sledgehammer Games present the exclusive live reveal of Call of Duty: Advanced Warfare multiplayer. More details can be found here, and I’ll set up a post on majornelson.com Monday with a video embed for easy viewing.

GAMESCOM 2014 XBOX BRIEFING AND AFTER SHOW:

For the first time, watch the gamescom Xbox Briefing live from wherever you are. The broadcast begins Tuesday, August 12th at 14:00 local time (which is 8am Eastern and an eye-opening 5am Pacific – set your alarm).

Watch everything on Xbox.com, your Xbox One, Xbox 360, Windows Phone (download the app here) or on Twitch.

We’ll be broadcasting live to www.Twitch.tv/Xbox direct from the Xbox booth from all gamescom long. We’re lining up a packed schedule of key first and third party Xbox One titles, including developer guest appearances. More details to come next week.

Of course, I’ll be tweeting from @majornelson all week long, and updating this site. Xbox Wire will be previewing nearly every Xbox game at the show throughout the week, and look for daily videos on Xbox One and Xbox 360 Dashboard.

See you live on Monday!