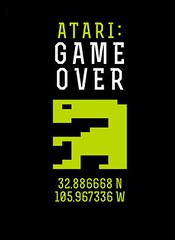 Remember earlier this year when I went out to the desert of New Mexico to join Director Zak Penn and get to the bottom of the legend of the ET Atari cartridges being buried?  The full story can now be told in the form of “Atari: Game Over” now available for free on Xbox 360, Xbox One and Xbox Video.

It’s free and available right now, so let me know what you think after you watch it.

What the critics are saying:

“I’m quite serious when I say this is one of the best video game documentaries ever made. That’s still a pretty niche field, but Atari: Game Over belongs up there with Indie Game: The Movie and King of Kong as a real standout.” – Hayden Dingman, PC World

“After getting an advance screening this weekend, GeekWire highly recommends the film, particularly for gamers who grew up in the era of the Atari 2600 — and even more for those who didn’t, as a way of appreciating the roots of the games they play today.” – Todd Bishop, GeekWire

“Atari: Game Over is a wonderful movie. It’s a love story about video games, the people who play them and the people who make them.” – Colin Campbell, Polygon

“The hour-long film chronicles the rise and fall of Atari by literally uncovering the truth of what happened to millions of unsold ‘E.T. The Extra-Terrestrial’ videogame cartridges in 1983.” – Marc Graser, Variety