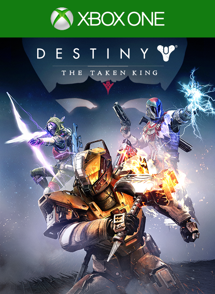 Game Description: DESTINY: THE TAKEN KING CONTENT EXPECTED TO RELEASE ON 09/15/2015. YOU MAY DOWNLOAD THE CONTENT FROM XBOX LIVE BEFORE THEN, BUT IT WILL NOT BE PLAYABLE UNTIL THE RELEASE DATE.

Oryx, The Taken King, has arrived in our solar system, bringing with him a corrupted army to exact revenge on the Guardians who destroyed his son Crota. The Taken King introduces a new story campaign, new enemies, new locations to explore, new Strikes, new Crucible maps, a new Raid and more. Guardians will also have access to three new devastating Guardian subclasses and a massive arsenal of weapons, armor, and gear.

Digital Collector’s Edition includes: Destiny, The Dark Below (Expansion I), House of Wolves (Expansion II) and The Taken King (estimated release date is 9/15/15). It also includes other content including commemorative digital items and VIP rewards – please read the full description found at the Destiny product page.

Pre-purchase to immediately begin playing Destiny and both Expansions (I & II) today!