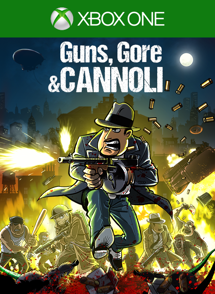 Game Description: The game tells the story of Vinnie Cannoli and his mob family, set in the fictional Thugtown circa 1925, the height of prohibition. Beneath the city overrun by zombies, there’s a dark story of conspiracy and betrayal. Unravel the sneaky mafia ways and government conspiracy while you try to look for your lost pal and for answers about the zombie-outbreak. Lose yourself in an exciting, elaborate tale of the underground and underworld. Experience friendship, betrayal, vengeance, and witness first hand the rise and fall of a criminal mastermind.

Purchase Guns, Gore and Cannoli for Xbox One from the Xbox Games Store