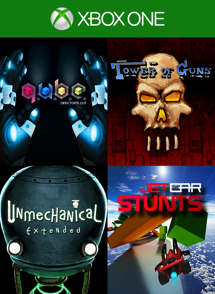 Q.U.B.E: Director’s Cut is a brain-twisting first-person puzzler. Using special high-tech gloves, you manipulate the environment around you – build bridges, shift walls, open new paths – in order to journey deep into a mysterious giant cube hurtling through space towards Earth and destroy it from within before it eradicates all life on our planet!

Tower of Guns is a fast-paced, bullet-hell, first person shooter with randomized levels and enemies, power ups, epic bosses and tons of unlockable items and weapons. You never know what to expect next!

Drive a Jet Car in Jet Car Stunts, a hybrid between a racing car and a jet plane, and race your way through the most devious tracks full of jumps, loops, free falls and sharp turns. Use your jet engine to perform mile-long jumps, find shortcuts and new paths and challenge the best racers around the world!

Unmechanical: Extended is an award-winning platformer/puzzle game loved by countless players around the world, now coming to Xbox One with a brand new “Extended” story episode that contains even more puzzles and mysteries to solve. Do you dare enter?