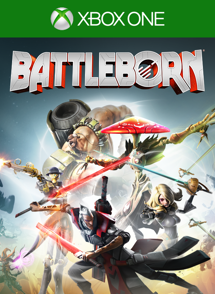 Heroes fight to protect the universe’s last star from mysterious evil in this next-gen shooter by the creators of Borderlands. Features a roster of 25 playable heroes, every hero has their own personality and comes equipped with unique weapons and powers. The Story Mode is a narrative experience that can be played entirely singleplayer, and can be played cooperatively with friends both splitscreen and online. Battleborn’s team-based competitive multiplayer can be experienced by up to 10 players online in 5v5 matches, and includes three distinct multiplayer modes – Incursion, Capture, and Meltdown.

There are 2 versions of Battleborn available for pre-order – Battleborn (PreOrder Bundle) and the Battleborn Digital Deluxe. Click each link for more details or see below.

Battleborn Digital Deluxe – this bundle includes Battleborn, Battleborn Firstborn Pack and the season pass (receive 5 DLC packs, each pack allowing you to command your Battleborn on all new Story Operations. Plus instantly unlock 5 new heroes when they release, and gain awesome new skins and taunts along the way).