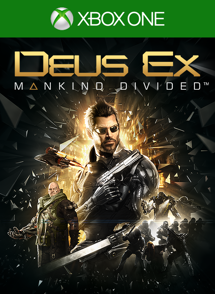 Game Description: The year is 2029, and mechanically augmented humans have been deemed outcasts, segregated from the rest of society. Now an elite covert agent, Adam Jensen is forced to operate in a world that has grown to despise his kind. Armed with an arsenal of state-of-the-art weapons and augmentations, he must choose the right approach, along with who to trust, in order to unravel a vast worldwide conspiracy.

For a limited time, purchase Deus Ex: Mankind Divided on Xbox One and receive Deus Ex: Human Revolution and The Missing Link Add-on, playable now on Xbox 360 and Xbox One via Backward Compatibility.

Purchase Deus Ex: Mankind Divided for Xbox One from the Xbox Games Store