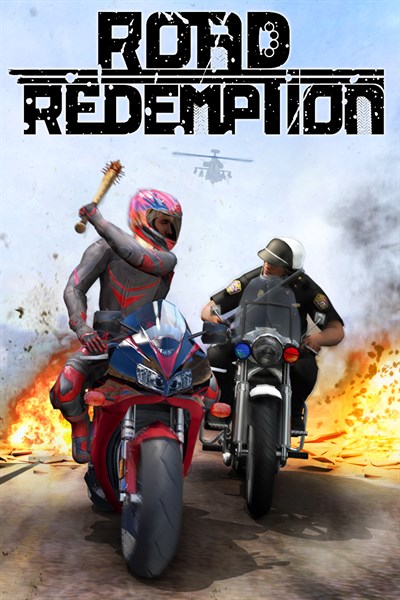 ☆☆☆☆☆ 145
★★★★★
$19.99
Get it now
In the fiery remnants of a once vibrant world, gangs battle for dominance across wartorn highways. When a motorcycle assassin takes out the boss of the richest weapons cartel, the cartel offers a bounty of wealth beyond imagination for the assassin’s head. Now every thug, warrior, and bounty hunter with a bike and blade is out to catch the assassin and win the bounty, including you. The race is on. To succeed, you’ll have to fight your way across the country, through both friendly and rival gang territory, with whatever weapons you can get your hands on: swords, shotguns, baseball bats, sledge hammers, pipe bombs, and so much more. You’ll need to use what you earn and learn along the way to upgrade yourself, your ride, and your weapons. The path to glory and riches is a long one paved in blood and pain, but luckily you’ve got a fast bike. Start Your Engines Road Redemption is an action racing game where you lead your motorcycle gang on an epic journey of pursuit, blood, and speed. Through your travels, you will upgrade your character, bike, and weapons by completing races, assassinations, robberies, and more. You’ll need to use kicks, grabs, counters, and other moves to stay alive. Death is a constant companion on the roads of the wasteland, but it is not an end; if you are killed, you keep everything you’ve earned so you can get back in the race. The Lone Wolf Dies, the Pack Survives Through local and online multiplayer, you can work together with your friends or grind them into road dust beneath your tires. You can play multiplayer online or through 2-4 player splitscreen. Features - Online Multiplayer - Tons of brutal weapons. - 4-player splitscreen co-op. - Massive, expandable skill tree. Rack in the lacoot to upgrade your character, your bike, and your weapons. - A deep motorcycle fighting system with grabs, kicks, counters, critical strikes, and more.