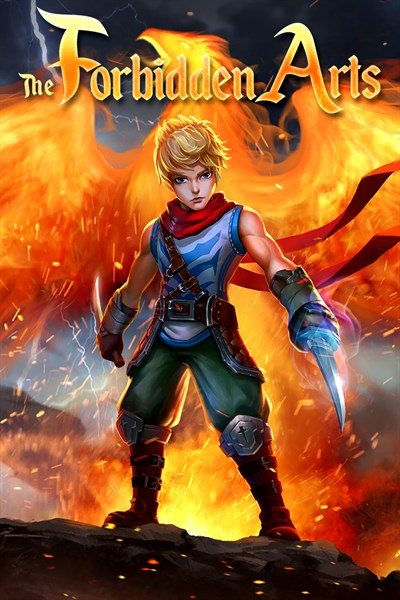 ☆☆☆☆☆ 10
★★★★★
$14.99
Get it now
Xbox One X Enhanced
The Forbidden Arts is an action adventure platformer with a focus on discovery and exploration. When the hero of the game, Phoenix, seeks the counsel of a druid to make sense of his visions, she awakens the latent pyromancy within him. This begins an epic journey from Phoenix’s humble beginnings as he seeks to master the element of fire. • Channel your pyromancer flame to cast devastating spells upon enemies and bosses, protect yourself from harm and manipulate the environment. ​ • Explore massive worlds with the ability to save your progress nearly anywhere and any time. You will alternate between 2d gameplay while in dungeons and 3d gameplay while exploring the world map. ​ • Test your agility as you scale walls, jump gaps, climb vines and maneuver through several distinct environments filled with obstacles and challenges. ​ • Progress through a captivating storyline following a young man who seeks the truth about himself and finds a grand adventure of ancient magic. ​ • Embark on quests from friendly NPCs and solve puzzles you encounter along the way. • Discover long-forgotten secret items and locations to unlock abilities and earn achievements. The time has come to summon your inner fire and prove to the world you have what it takes to be called a pyromancer. Play The Forbidden Arts today.
Product Info:
Developer: Stingbot
Publisher: Stingbot
Website: The Forbidden Arts
Twitter: @StingbotGames