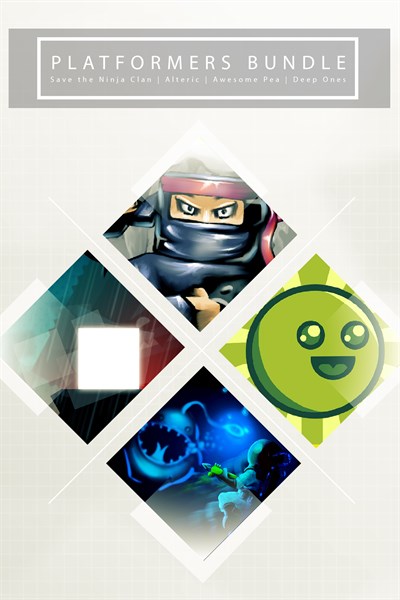 ☆☆☆☆☆
★★★★★
$14.99
Get it now
This bundle includes the following set of platformer games with discount: – Alteric – Save the Ninja Clan – Awesome Pea – Deep Ones * Alteric You are alone. Are you lonely? You're lost. Or stuck? Somewhere…but where? And most importantly, who are you? Only Yesterday You Were A Man. Today Everything Has Changed. You Died. But your soul is still there. It’s a piece of light energy trapped in the alien space between two worlds. A single player 2D-platformer Bright minimalistic graphics Hardcore gameplay with physics, gravity and logic 2 interconnected parallel worlds A variety of obstacles and dangerous bosses Atmospheric soundtrack According to the developers – 'We tried to develop a game in such a way that the player realized: here, Thomas meets with Dark Souls' * Save the Ninja Clan Save the Ninja Clan is a platformer for casual players as well as speed runners. There are two ways to play this game: play through the normal story mode or find secrets/"bugs" in the game to annoy the Game Manager watching. Story An evil ninja kidnapped your friends. You must collect scrolls in order to find your friends and save them. You will play as different ninjas as the journey progresses. Each ninja has a different ability: Green ninja has a double jump, Purple Ninja has a sprint, and the Grey Ninja has a dash (with temporary invincibility). Alternate Story You can annoy the "Game Manager" by finding secrets/"bugs" in the game. Eventually he will get tired of you breaking the current level and send you off to the next one. Features – 30 Unique Levels. – Secrets/Bugs in all non boss levels. – 3 Ninja types with different abilities. – 3 Boss Fights. – Game too hard or too easy? Adjust the game speed. – You can unlock knife modifications. – Many stats are tracked. – Replays that show previous attempts. – Secret ending which unlocks something secret. * Awesome Pea Help the greedy Pea make his way through a string of levels filled with deadly traps and cute (but dangerous) enemies and collect all the coins he can reach! Welcome to the Awesome Islands World! Awesome Pea is a classic run-and-jump platformer, where you must jump through many challenging levels and help the greedy Pea, who is ready to undergo any trials for the sake of gold. Dangerous dungeons, deceptively beautiful nature, hidden deadly traps, and many MANY coins await you! What you will definitely find in this game: – Stylish pixel graphics inspired by Game Boy games – 30 different levels – Stunning retro soundtrack * Deep Ones «Deep Ones» is a retro arcade-platformer with multigenre parts, inspired by ZX Spectrum and works of H. P. Lovecraft. The main protagonist of this story suffers a crash on his submarine. The great red octopus is the reason of this, his will of destroying every traveler that he encounters may seem unbeatable, but Diver isn't exactly as simple as he looks. He is encouraged to walk along the bottom of the ocean, plunge into the depths of the darkest corners, to rip and tear through the thick plants of sea weed and fight with the most unknown creatures of the world that is beneath, just to get his submarine back in his command. On his path, he will witness many beautiful landscapes of the scenery and will acquire many trustworthy allies, all of which will also enrich his stories that will be worthy of telling about… That is, of course, if you'll be able to help him survive and triumph over the evil. Features: – Compeling and philosophical storyline – Unsual visual presentation of the game, inspired by the ZX Spectrum – Classic arcade gameplay – Diffirent genre entries, for example, "shoot 'em up" genre will make it's way into the game, at a certain point.