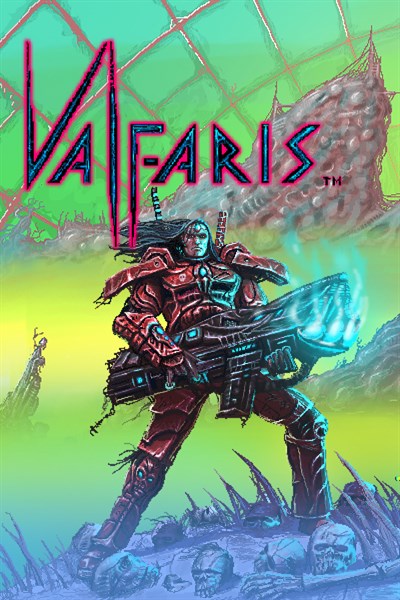 ☆☆☆☆☆ 50
★★★★★
$24.99
Get it now
Xbox One X Enhanced
Valfaris’s take on New Game +. Restart with your entire collected arsenal and upgrades to face off against more difficult enemies, battle buffed bosses encounters, and seek out the new Destroyer class weapon! After mysteriously vanishing from galactic charts, the fortress of Valfaris has suddenly reappeared in the orbit of a dying sun. Once a self-contained paradise, the grandiose citadel now plays host to an ever-growing darkness. Therion, a fearless and proud son of Valfaris, returns to his home to uncover the truth of its doomed fate and to challenge the arcane evil at its very heart. Key Features: Skulls in space! Gore in space! Metal in space! Savagely reduce foes to piles of gibs with an array of brutal weaponry Explore a diverse range of tainted environments as you venture ever deeper into the dark world of Valfaris Dominate ranks of deadly enemies and bosses, from the weird to the grotesque (and some that are just grotesquely weird) Gorge your eyes on devastatingly awesome pixel art hand-crafted by Andrew Gilmour Feel the power of a seismic soundtrack by extreme metaller and former Celtic Frost guitarist, Curt Victor Bryant Forged from the ground-up by the team behind cult hit Slain: Back From Hell Complete the game to unlock Full Metal Mode for an even deadlier challenge!
Product Info:
Developer: Steel Mantis / Stage Clear Studios
Publisher: Big Sugar
Website: Valfaris
Twitter: @stagecs / @BigSugarGames / @ValfarisGame