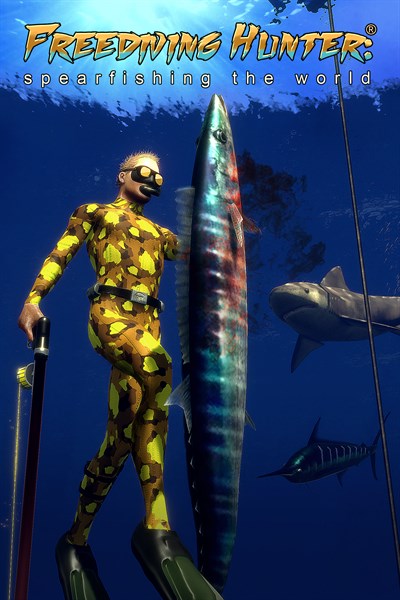 ☆☆☆☆☆ 14
★★★★★
$19.99
Get it now
In this game, the player will choose their player character (male or female of various races/ethnicities) to compete against increasingly difficult spearfishing challengers from around the world with the goal of becoming the champion Freediving Hunter over all. On the way to becoming the champion the player will unlock lush saltwater marine environments around the world such as stunning reefs teeming with sea life, ancient shipwrecks and ruins, kelp forests, etc. in an exciting hunt for prized saltwater fish. The player will earn money with every fish they hunt, every challenger they defeat and every special shot they pull off, giving them the ability to buy new masks, fins, guns, wetsuits and flashlights to gain more advantage over their opponents and their prey. As the player conquers the depths, the fish will become bigger and more exotic. Of course, the player will also be warding off hungry sharks that are trying to steal their fish at all times while also avoiding the ever-present blackout danger, creating a very challenging, thrilling and suspenseful gameplay.
Product Info:
Developer: Strongbox3d
Publisher: Strongbox3d
Website: Freediving Hunter: Spearfishing The World
Twitter: @Strongbox3d