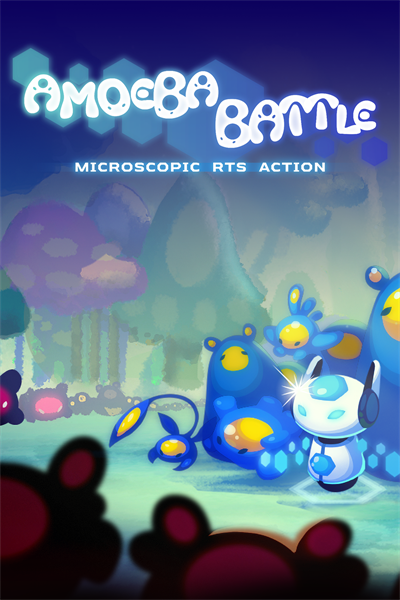 ☆☆☆☆☆ 10
★★★★★
$14.99
Get it now
Amoeba Battle is a new breed of real-time strategy game where you control versatile amoebas in the battle for the microscopic world. Unlike other RTS games, there are no bases to build - new amoebas are created through the miracle of binary fission! First though, your amoebas must forage for food in the beautiful yet alien environments that make up their world. Once well fed, these amoebas can replicate into two identical amoebas of the same type, doubling your army with a press of a button! But multiplying amoebas won't always be enough. You will need to introduce mutations to evolve your weaker amoebas into stronger species. Experiment with different amoeba combinations to field a diverse force that can face any threat! TAKE BACK THE MICROSCOPIC WORLD - Stop the infection and destroy its source in the varied and intense twelve mission campaign with four difficulty levels. 18 PLAYER FREE FOR ALL - Compete against other players in our 18-player free-for-all Versus mode or take on the AI in Skirmish, either solo or with up to two friends. DELIGHTFUL ART STYLE - Journey through four exotic landscapes and battle with nine species of amoeba, all delicately rendered using a remarkable fusion of watercolors and pixel art. Experience an innovative real-time strategy game on a never-before-seen scale and battle for primordial soup-remacy in Amoeba Battle!
Product Info:
Developer: Grab Games
Publisher: Grab Games
Website: Amoeba Battle – Microscopic RTS Action
Twitter: @grab