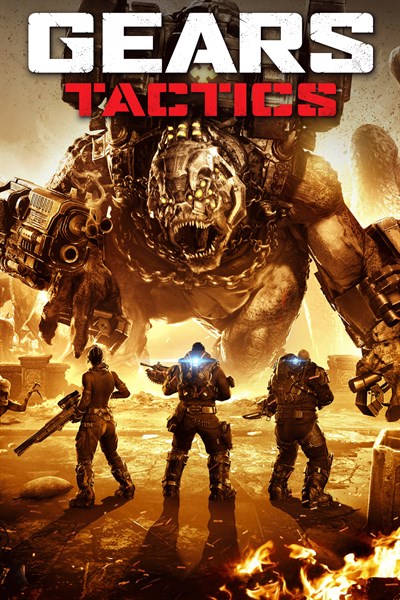 ☆☆☆☆☆
★★★★★
$59.99
Pre-order
Xbox One X Enhanced
Xbox Game Pass
Complete the Gears Tactics tutorial and get Armored Gabe Character Skin for multiplayer modes in Gears 5 starting on November 17. Pre-order Gears Tactics or play Gears Tactics on Xbox Game Pass before Dec 4, 2020 and receive the Thrashball Cole Character Pack.* Gears Tactics is the fast-paced, turn-based strategy game set 12 years before the first Gears of War. Cities on the planet Sera are beginning to fall to the monstrous threat rising from underground – the Locust Horde. With the government in disarray, a squad of survivors emerge as humanity's last hope. Play as Gabe Diaz, recruiting, equipping and commanding your squads on a desperate mission to hunt down the relentless and powerful leader of the Locust army: Ukkon, the evil mastermind who makes monsters. Against all odds and fighting for survival, outsmart your enemy in uniquely brutal, turn-based tactical combat. Experience the intensity of one of the most-acclaimed video game sagas in an exciting new way. - Immersive and character-driven story: Play as the defiant soldier Gabe Diaz, rescuing and building your troops in a journey of leadership, survival and sacrifice. - Customizable squad and equipment: Prepare your troops to face tough enemies, upgrading their skills and outfitting them with loot collected in challenging missions. - Aggressive gameplay: Command your squad in fast paced, turn-based battles, advancing and surviving intense and visceral encounters with the unstoppable, swarming enemy. - Massive boss battles: Defeat towering deadly bosses that defy your strategies and completely change the scale of the battle. - New content: Jack joins the fight with over 20 skills to combat new, powerful enemies. Improve your weapons and armor with Supreme equipment. - Optimized for Xbox Series X: Gears Tactics features Smart Delivery and plays in 4K Ultra HD at 60 frames per second. * Offer valid for (1) pre-orders of Gears Tactics digital game on Microsoft Store or Microsoft.com OR (2) playing of Gears Tactics with an active Xbox Game Pass membership by Dec 4, 2020. Content requires internet to download. May take up to two weeks to receive content in-game.
NOTE: You may pre-download this game, but it will not be playable until the release date/time: 11/09/2020 – 8:00 AM (check the product page for release date/time in your region).

Gears Tactics is included with Xbox Game Pass at release

Play Gears Tactics on day one with Xbox Game Pass.  Xbox Game Pass Ultimate gives you access to over 100 high-quality games, plus all the benefits of Xbox Live Gold for one low monthly price. Sign up today!