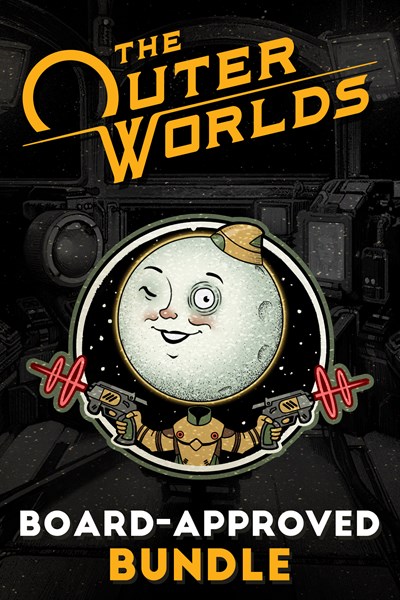 ☆☆☆☆☆ 46
★★★★★
$79.99
Get it now
The Outer Worlds: Board-Approved Bundle, now with 100% less packaging! This bundle features The Outer Worlds and The Outer Worlds Expansion Pass, which includes both story-based expansions for the game: Peril on Gorgon is out now and Murder on Eridanos is coming in the first half of 2021. THE OUTER WORLDS The Outer Worlds is the award-winning single-player first-person sci-fi RPG from Obsidian Entertainment and Private Division. Lost in transit while on a colonist ship bound for the furthest edge of the galaxy, you awake decades later only to find yourself in the midst of a deep conspiracy threatening to destroy the Halcyon colony. As you explore the furthest reaches of space and encounter various factions, all vying for power, the character you decide to become will determine how this player-driven story unfolds. In the corporate equation for the colony, you are the unplanned variable. THE OUTER WORLDS EXPANSION PASS The Outer Worlds Expansion Pass includes two story expansions. Experience mysterious new conflicts, intriguing quests, strange new locations, outlandish weapons, devious characters, and additional ways to aid or defy the Board of Halcyon in two additional narrative expansions for the darkly-humorous, critically-acclaimed, and award-winning sci-fi RPG from Obsidian Entertainment and Private Division. • The Outer Worlds: Peril on Gorgon is available now. Investigate the dark secrets of one of the most ambitious scientific undertakings in Halcyon: the development and synthesis of Adrena-Time, a drug intended to improve the productivity of workers across the colony. • The Outer Worlds: Murder on Eridanos will launch in 2021. Halcyon Helen’s final (and finest!) adventure. A copy of The Outer Worlds on the same platform is required to play expansion pass content. All content for The Outer Worlds Expansion Pass will be available in the first half of 2021.
Product Info:
Developer: Obsidian Entertainment
Publisher: Private Division
Website: The Outer Worlds
Twitter: @Obsidian / @PrivateDivision / @OuterWorlds