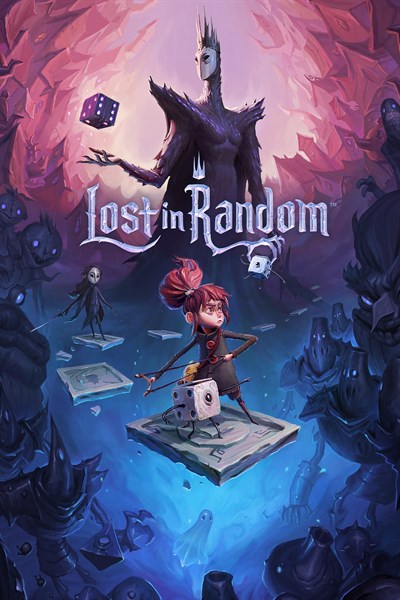 ☆☆☆☆☆
★★★★★
$29.99 $26.99
Pre-order
Play the odds in Lost in Random™, a gothic fairytale-inspired action adventure where every citizen’s fate is determined by the roll of a dice. Ruled by a wicked Queen, the kingdom of Random is divided into six shadowy realms where life is dictated by a cursed black dice. In this story, from the award-winning Swedish game studio Zoink and penned by Eisner Award-winning Adventure Time and Marvel Comics The Unbeatable Squirrel Girl author Ryan North, you’ll join Even, a penniless girl who’s down on her luck, in a dark quest to save her beloved sister. With her companion Dicey, a small and strange living dice, Even must learn to embrace the chaos of Random, uncovering an age-old tale with a modern message. Walk Random’s mysterious cobbled streets, meet its unpredictable residents, and take on courageous quests. Engage in fearsome battles with a unique blend of tactical combat, card collection, and explosive dice gameplay. It’s time to adapt or perish, as you battle inside giant board game arenas that change with every dice throw! Learn how to tip the odds in your favor, and dive into a dark wonderland where only the brave survive. UNCOVER A TWISTED FAIRYTALE – Penned by Eisner Award-winning Adventure Time and Marvel Comics The Unbeatable Squirrel Girl author, Ryan North, step into a beautiful and haunted wonderland where you must venture through the six twisted realms of Random, each with its own maddening set of rules. Help its unpredictable inhabitants, save your sister, and discover a twisted tale with a very modern message. ROLL WITH IT, IN EPIC TACTICAL DICE BATTLES - Face the unknown in a unique blend of tactical combat and card collection, adapt your battle strategy on the fly within evolving board game arenas. DEFY YOUR FATE AGAINST ALL ODDS – Defy a cursed fate and harness the power of randomness. Team up with your friend Dicey to play the odds, where the course of battle can be changed with the throw of a dice. Play the odds. Win the game. Pre-order now! CONDITIONS AND RESTRICTIONS APPLY. SEE WWW.EA.COM/LEGAL FOR DETAILS.
NOTE: You may pre-download this game, but it will not be playable until the release date/time: 09/10/2021 – 2:00 AM (check the product page for release date/time in your region).