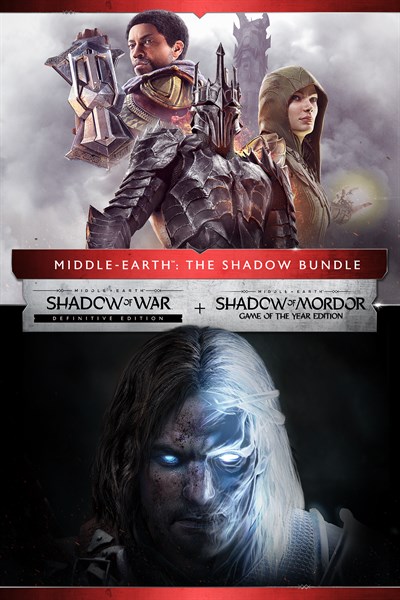 ☆☆☆☆☆ 2
★★★★★
$69.99
Get it now
Shadow of War: Definitive Edition Experience an epic open world brought to life by the award-winning Nemesis System. Forge a new Ring of Power, conquer Fortresses in massive battles and dominate Mordor with your personal Orc army in Middle-earth™: Shadow of War™: Definitive Edition. The Definitive Edition includes all downloadable content: • Desolation of Mordor and Blade of Galadriel Story Expansions • Slaughter Tribe and Outlaw Tribe Nemesis Expansions Nemesis and Story Expansions include a new playable character, an Orc Tribe with new missions, enemies, followers, abilities, weapons, Fortress and wilderness updates, and a Legendary Gear Set. Story Expansions introduce a new playable character & abilities, story campaigns, side missions, enemies, allies & more. Shadow of Mordor Game of the Year Edition Fight through Mordor and uncover the truth of the spirit that compels you, discover the origins of the Rings of Power, build your legend and ultimately confront the evil of Sauron in this new chronicle of Middle-earth. Note: These features for the Middle-earth™: Shadow of Mordor™ videogame are no longer available: • The Nemesis Forge feature will no longer be available. Therefore, players will no longer be able to transfer their in-game Nemeses from Middle-earth: Shadow of Mordor to Middle-earth: Shadow of War. • Vendetta missions and Leaderboards will no longer be available. • WBPlay will no longer be available, but the epic runes "Orc Hunter" and "Gravewalker" will automatically be awarded to all players.
Product Info:
Developer: Monolith Productions
Publisher: Warner Bros. Games
Website: Middle-earth
Twitter: @MonolithDev /@wbgames / @shadowofwargame